This is a summary of the research carried out by Sheila Wheatley with input from Paul Barrett into the history of Henry (aka Harry) Barrett b 1854 and Elizabeth Alder b 1850.  Henry and Elizabeth were married 7 Nov 1874.  We want to document Henry’s ancestors to see if we share a common ancestor, and we would also like to reach out to other researchers of the Barretts and Alders of Berkshire / Oxfordshire, England for help resolving some issues.

Elizabeth is not a direct ancestor of Sheila, Paul and their sister Christine – she is a cousin of Ferberd Barrett who is our 2 x great grandfather.  Neither is Henry, who merely shares our family name.

Henry Barrett is the husband of Elizabeth Alder, who is the cousin of Ferberd Barrett, who is the 2 x great grandfather of [Sheila, Paul and Chris.]

So why did we decide to research this obscure branch of our tree?

How this line of research began

Barrett is a very common name in 19th century East Berkshire (now Oxfordshire), England but it’s our family name so we have to spend time sorting true from false relatives, although if we had the time, energy and money to research them all we might find some common ancestors in the dim distant past.  And, as we also have Alders in our line, a combination of the two is always worth investigating. But there were several other drivers for this research:

This was a maddening piece of research with several false trails that came together slowly and fell apart quickly but I was eventually able to identify a tentative ancestral line starting with Henry Barrett. However, there are two ambiguities.  This ancestral chart and map mash-up was created by Paul to summarise my findings, and show the ambiguities. 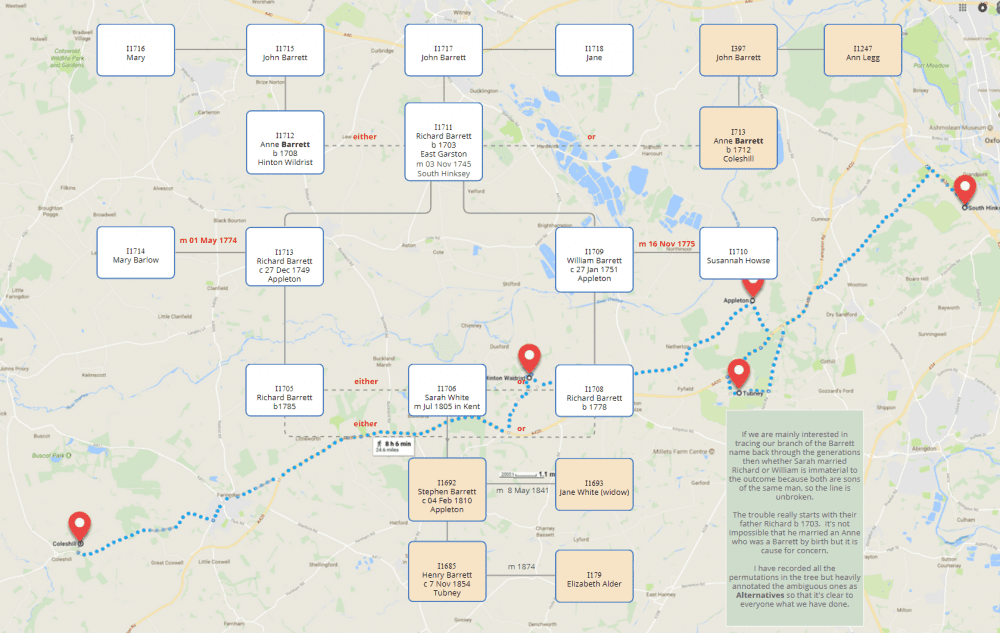 The problems start in Generation 3 with Sarah White who is, incidentally, no relation to Jane White, about whom we know little else.

Sarah marries a Richard Barrett in Kent in July 1805 but while I am sure that it can only have been one of two candidates, it’s impossible to determine whether it’s Richard 1 (on the left) b 1785 or Richard 2 b 1778.  If all we are concerned about is tracing our line back through the generations then it’s immaterial which Richard it is because, as it happens their respective fathers are brothers and therefore sons of the same man as we can see in Generations 4 and 5 on the chart.  However, we would also like to reflect the truth.

So, our first plea for help is to anyone who is researching the ancestry of Henry Barrett and Elizabeth Alder.  Can you help us figure out which Richard married Sarah White?

The second problem is in Generation 5 where another alternative spouse situation occurs.  By this time in the search for a shared ancestor of Henry Barrett, and Sheila, Paul and Christine Barrett, the relationship is getting more distant.

The good news is that the line that previously diverged with the two Richards (who are this Richard’s grandsons)  has obviously converged again. The bad news is that it immediately diverges again at this generation because it’s unclear who this Richard’s wife is. There are two candidates, both called Anne Barrett.

The two Annes were born in 1708 and 1712, and Richard in 1703 which puts them in the same age range for a potential marriage but the marriage did not take place until Nov 1745 by which time their ages were:

Therefore it’s possible that all three could have been married previously. If that’s the case then the birth names of the two Annes is not known at this stage. If they are not Barretts then things get messed up but it’s also plausible that this was a first time marriage and that their birth name was Barrett.  For now, that’s the basis on which we have proceeded. 2 3

From a selfish point of view, the most appealing marriage is Anne 2, because …

… which means that this branch of the family does, in fact, connect back to a common ancestor and takes this Barrett line back to yet another Richard Barrett b1630, our 9 x great grandfather!

But, great though it would be if this were true, we have to accept that there are many assumptions along the way, which leads us to our second plea for help.

If anyone out there can help us confirm which Anne married Richard, and who her parents were, it would help us identify the truth.

The Skeleton in the Closet

The Origin of the Name Ferberd