The 1901 census finds Gertrude, now 32, living with her parents in Tubney. So, where is Walter? He is at 5 Station Road, Stratfield Mortimer, and is a coachman and hotel groom. Children: Lizzie age 11 Christopher age 10 Gertrude age 9 Walter Henry age 6 Frederick age 5 Annie age 3 Sydney age 1. Also there is Ellen, sister-in-law age 22 and described as housemaid.

Why is Gertrude with parents and Ellen with Walter and children? A thought for investigation, which surrounds a letter from one Nellie Costar to great grandfather Harry’s wife Annie (Mary Anne Chandler). because the author of the letter is one Nellie Costar, I had assumed initially that it was written by Gertrude as her married name was Costar. However, Gertrude’s middle name was Emma and Nellie is usually a nick name for Ellen. What if Gertrude died and Ellen married Walter afterwards? The letter is thought to have been written between 1939 and 1943, as the author had omitted the year from the letter.

Found a death reference for Gertrude age 62 @ Bradfield 2c page 351a 3rd quarter 1930. Then found a marriage reference for Walter for the 4th quarter of 1930 which cross references with one for an Ellen Barrett. (Did Walter and Gertrude separate and could have Ellen and Walter have lived together for some time before their marriage?

The 1911 census could be quite interesting!)

Death reference found for Walter@ Bingham 7b page 407 3rd quarter 1938. May need to check if all children listed above are Gertrude’s or whether some could be Ellen’s

Gertrude’s death certificate is quite revealing. She is described as Gertrude Emma Costar Rockall wife of Frank Thomas Rockall, a domestic gardener. But there is a registrar’s note in column 9 basically stating that Walter Costar produced a Statutory Declaration that she was his widow and not Frank Rockall’s.

Further Information January 2009 The 1911 census is now available in part. Found Gertrude on 1911 census age 42 as a boarder and assistant at The Star Inn, 39 St. Clements, Oxford. The publican is one Phillip Webb and his wife is Martha.

There is an earlier connection with the Webbs’ with John Barrett (4: 10).  His second wife was a Webb. There is a Phillip Webb living with them in 1851. He was 16 in 1851 so born around 1835.  On 1911 census that Phillip is 76, – 1835 plus 76 equals 1911. Most likely to be one and the same person. Gertrude is at the inn by herself without family, so where are her husband Walter and children, Lizzie, Christopher, Gertrude, Walter Henry, Frederick, Annie and Sydney?

Search for Husband Walter on 1911 census finds nothing but it is known that he is alive until 1938. Also not found on this census are Christopher, Gertrude, Walter Henry and Sydney. It is probable that this census is not yet complete, so they may be found later.

The death references were checked between the censuses and nothing was found for any of these children. Lizzie was found age 21 as a housemaid in Southport Lancashire. Annie was found age 13 as domestic servant in Wortley near Sheffield. Frederick was found as a servant at St. Cuthbert’s College, Worksop. Possible marriage references have been found for all children except Christopher and Walter Henry.

Details to following the next generation line. There is nothing to indicate that Gertrude (senior) has met Frank Rockall yet, according to the 1911 census he is residing in Islington. It might appear on the surface that Walter and Gertrude have split, although Walter may be away looking for work, but it would appear that the rest of the children may be with him as none of them can be found on census. Oh, for the 1921 census!!!!

[Paul : Here are the notes from Ellen’s record]

After Gertrude’s death in 1930, Ellen marries Gertrude’s husband Walter Costar, also in 1930. Walter died in 1938. (Awaiting certificates) So it would seem that Ellen (Nellie) wrote the letter to Great Granny Barrett (Harry’s wife) after all. At the time the letter was written, Ellen was living in Upper Broughton, which is a little north west of Melton Mowbray and Bingham where Bertha is supposed to have died is not that far away. The date on the letter is 22nd July but no year is given.

As previously discussed, because of the content of the letter and the fact that its recipient died in 1943, it is thought to have been written between 1939 and 1943. A death reference was found for Ellen age 79 @ Southwell v 3c page 586 1st quarter 1958. The 1911 and 1921 censuses could reveal more information about the relationships here. The 1911 census is not as revealing as hoped. Ellen is living at home in Fyfield with her father Ferberd ( ggg-grandfather).

Walter Costar cannot be found on the new census, so will have to wait, as possibly the 1911 census is not complete and maybe the 1921 census may reveal more. Ellen’s death certificate shows she died on 20th March 1958 age 79 from senile arteriosclerosis. Her death was reported by an F. H. Smith, her adopted son of 5 Emmanuel Ave, Mapperley. Nottingham. May try to find out about him. 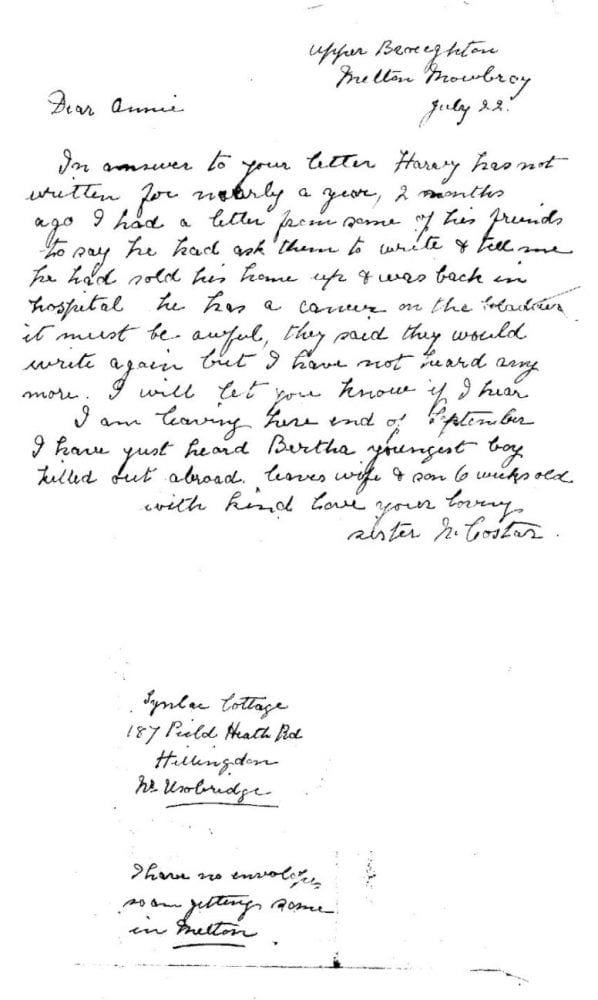 Letter from Nellie Costar (Ellen Barrett) to Annie Barrett (Mary Ann Chandler)
Re the letter from Ellen Costar to GG Barrett ( Mary Ann Chandler).  She refers to Great Granny as Annie and if I hadn’t seen the reverse of this letter which had the address to which it was sent, it could have almost been sent to anyone from anyone.
There’s not a vast amount of info in it . The year it was written has been omitted. Considering that Great Granny died in 1943 and a story Dad told of Harry being seen in a train one night by Ferberd, Dad’s father, about 1938/39, then it can only have been written between 38 and 43 but nearer 43 if the ref to Bertha is correct.
The other interesting thing about the letter is that Bertha Barrett is referred to as having her youngest son killed in the second world war. BUT a chance contact from someone through Ancestry told me that Bertha was her grandmother and that her youngest son was Barnet Ashford who was her father. Carol’s story is that Bertha sent for her husband, William who was a carpenter in the Merchant Navy and then put her 3 children into a home and disappeared to pursue her singing career! William and Bertha were supposed to have been married in New York 1906 as she was travelling with him at this time but I cannot find any factual information for this.
William Ashford was found on 1911 census with a wife Bertha who was born in Longworth. Then there seems to be even more confusion, because according to the death certificate of Harry and Bertha’s father Ferberd, who died in 1923, the person recorded as being present at his death is one Bertha Vera Simpson, his daughter!
Have just re read all my notes on this and there is a possibility that I overlooked in that I found a marriage re for a Bertha Barrett to a Fred Simpson in 1911 4th q but at Luton and I ignored it because I couldn’t see the Luton connection. Think I’m going to order it for curiosity’s sake as something’s just occurred to me

Henry Barrett b 1854 and Elizabeth Alder b 1850, and Henry’s Ancestors